School’s out for the summer 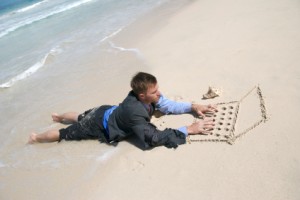 During June & July last year I spent time working with a children’s entertainment company called Sharky & George who had a refreshingly unique way of responding to school holidays that has shaped the way they work and prompted me to think there may be a new rhythm required for organisations.

As the children all sprinted from the school gates to spend a summer away with their families and friends the customer demands quieten significantly and I got to talking with the owners about what to do with all this new found time and breathing space. What project to work on next? What to re-design, tweak and improve?

I had spent the previous 8 years working in a fast paced and toe tapping business, led with an entrepreneurial enthusiasm to rush onto a shiny new project as soon as one was invariably half or three-quarters finished. So I had got used to the idea that there wasn’t a moment to lose in the drive for success. The feeling being that if we sat back our competitors would sneak up whilst we were caught napping and steal our customers! So I’ll admit S&G’s response to my question of what next initially quite took me back. “Well actually we quite like to use this time to rest up and relax after the madness of summer before we get on to thinking about any of that. We think it’s important to recover first”.

At the time this seemed an unusually laid back way of running an organisation. I was fixed into thinking what they could do with those golden months of few customers and much sought after calm. And then I got thinking a different way. How much calm time do we give ourselves and what would be the benefits if we did? We know the expression ‘the calm before the storm’ and that magic stillness that occurs as energy is drawn up and collected before being released with energised power and effect. Could organisations draw upon such power if they worked by these cycles?
Around the same time I had an interestingly aligned conversation with my Thinking colleague, Aidan Ward, about the business world’s post-industrial obsession with leanness and the misplaced view that being lean in itself helps improve organisational efficiency.

Aidan asked me to think about humans being both living breathing organisms and also living breathing systems. We imagined what would happen if those systems were made as lean as they could be, stretched to their limits with none left in reserve. How long could they last before they were depleted and run to ruin? This connection made me realise how soon those systems would beginning to crack and break, without no time to recover.

As living organisms we rely on rest and recuperation to operate at our best. We know sleep is a vital state of being, where the physical body re-charges and the mind dips into our un-conscious word to process and reflect upon itself. I am not suggesting businesses go to sleep, as a business asleep is not aware of the changing world around it and competitors may well steal a march in their slumber. But as with the tortoise and the hare it may be that a more measured approach which doesn’t overly exert the system will help it reach its goal faster and having done itself less damage in the process. Less haste, more speed.

There’s another common wisdom that sometimes ‘a change is as a good as a rest’. So perhaps pupils and teachers benefit from the regular breaks and long holidays not just for the rest it provides but also for the change of scenery and mental landscape that allows them to return with a recovered capacity to work at their best for another intense term. The change in surroundings also providing new influences and activities to widen their horizons and stimulate different kinds of learning found outside of the school gates.

We take the time to sleep because we know we need it to perform at our best. Our schools have regular breaks and long holidays as we know it benefits their capacity to return and work at their best. So can we can set a new tempo which helps organisations to fall into a healthier and more fruitful rhythm?

In Europe many workers take off a whole month over the summer in the way that schools do. Many business taking a siesta as their worker bees migrate to fresher airs and calmer tides. European football leagues another good example, who take mid-season winter breaks and subsequently achieve better results. Players in those countries consistently performing better in elite club and country competitions in comparison to their British counterparts. This rest often being lauded as a key reason for why throughout the second half of the season European players have a physical advantage, fewer injuries and less mental fatigue that affects their tactical thinking and decision making. Is this an issue simply confined to British footballing teams? Or is there a wider issue in a workaholic nation increasingly expectant of same day deliveries and 24/7 shopping?

Organisations are living systems and I think we need to treat them with the same level of care we do ourselves, gaining more understanding of their capacity and limits. With a tad more rest and time to look up and gain some extra perspective we could think faster, act quicker and be more alive to our creative potential. With a little more fat on the bones and a few extra hours built in we might have the resources to deal with the inevitable unforeseen and be alert to the risks around us so we could adapt and survive. If we stopped flogging the system and pushing it ever closer to it’s limits we might well give ourselves a chance for longer term health, wealth and success. As I suspect a certain children’s entertainment company I know will most likely enjoy.